After watching tonight's episode of The Walking Dead titled "Service", which systematically sets the foundation for a frightening future, I feel like Rick - scared, hopeless, and frustrated. I think a lot of us do. After killing two of our friends, Negan waltzes into our town, takes half of our shit and then set it on fire.

Trump, is our Negan and Obama and our shit is everything he accomplished, meant, and represented to us.

In the aftermath of the election, Trump, endorsed by the KKK, (which apparently is not a deal breaker for 60,350,241 people) has appointed Stephen Bannon as his chief strategist. Bannon, was the executive chairman of Breitbart News, which is the go-to website for the “alt-right” which are today’s white supremacists. This is Trump/Negan setting our mattresses on fire.

He has also chosen Ken Blackwell, who believes that homosexuality is a choice, and lobbies lawmakers against LGBTQ rights and abortion, to lead the transition team on domestic policy.

He also selected Myron Ebell, who believes that the whole notion of global warming is “silly” and that even scientists think it’s silly and feels embarrassed wasting time on such a silly issue, to head the transition plans for the EPA.

This is the moment in tonight’s episode where after pillaging Rick’s community, Negan is finally about to leave when he stops and leans into Rick and says, “In case you haven’t caught on, I just slid my dick down your throat and you thanked me for it.” 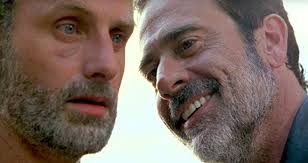 I’m wide awake, I can’t sleep. I’ve got to find a way to come to grips with what is happening. I can’t live in this emotional hell for four years.

Within 24 hours of learning that Trump was elected my period came a week early. My uterus is weeping. I also ended up getting sent home with a bottle of lithium to combat feelings of depression after a doctor’s visit.

Ok, so I know that when you change the way you look at things, the things change, right? In an effort to move out of the shock of this I need to start looking at this in a different way.

I am on a quest for answers. What is right about this that I’m not getting? Where’s the silver lining that I’m not seeing? Could he be a blessing in a vile orange disguise?

Did you see the look on Trump's face while he was sitting next to Obama in the White House? He looked scared shitless. He’s already talking about how he doesn’t want to live at the White House full time. This guy doesn’t have a clue.

The one and only appealing quality about Trump that I can acknowledge is that he is vehemently anti-establishment. For those of us that feel that literally anything is better than politics as usual, well, Trump counts as anything. Ugh! Is he the catalyst for a new political structure?

Even though the names being circulated for positions in his cabinet are well known political actors, no matter who is advising him, Trump will do what he wants. Trump is capable of lining these people up in place only to run them over. He doesn’t listen and he doesn’t play well with others.

I just listened to an interview with psychic medium Sheila Gillette, who channels THEO. Sheila is the one who taught now best-selling author Esther Hicks, how to channel.

I have to say that I'm feeling slightly relieved. I'll take what I can get at this point. Here are a few excerpts from the interview: (FYI she doesn't speak in complete and coherent sentences...kind of like our new president.)

Q: It feels as though hate, anger, and bigotry won. How is this possible? Are there still that many hateful people in our society?

A: No. It appears as such but understand this, that a great percentage of those that could have voted, had their voices heard, did not. That is the apathy non responsibility taking. But this needed to surface you see and it took the actor in this play to bring it out. Yes? He did not know he would win. But he had a pulse on certain people that he could activate, and did. So brought all of that to the surface that was there and it is good to know.

Q: Will all the progress that Obama has made over the last 8 years be destroyed?

A: No. There is much talk about that but once seen there will not be the undoing as had been the rhetoric spoken. That was to incite and to enliven and to bring forth the pain in people. It was a manipulation.

Q: What happened in the first meeting between Trump and Obama? Trump looked like he was in shock.

A: He is, yes. He had never met the man before. Not only did he like him he thought he was extremely smart and gracious. He was a bit over his head. He is emotionally immature as has been seen. So seeing the frightened boy, you’ve heard me long speak about the fragmented aspects of the soul, so you’re bearing witness to those parts of this one acting out.

Q: It seems like Trump has already changed into a more humble man. Can you speak to how he will govern and do you see him remaining in office?

A: He’s learning already what he didn’t know. And know that the arrogance of one such as this is covering up for insecurities. So you will witness he’s beginning to understand the enormity of the position.

Q: How will Mother Earth be affected with his view on climate change wanting to drill in National Parks and pipeline proposals on the table? How is that going to turn out?

A: He will have much opposition if he tries to do that but understand this: his eyes are being opened to the truths. He didn’t know what he is learning now. And world leaders would turn against him. He’s finding this to be a daunting challenge already.

Q: Will support for the LGBTQ community be affected in a positive or negative way?

A: The people will support as they have done. And, Trump is not against the people as he has so vehemently stated. That was rhetoric to rile certain people, to engage theater, but it brought forth great fear.

Q: Will it change in the Supreme Court restricting the choices, rights, and freedoms of the people?

A: There will be some changes. However, they are held by the laws of the country. So even though it might be a bit more conservative, there are many changes coming to that court in the next six years but not all at once.

Q: How can you help us with how to interact with our friends and family who voted very differently from ourselves?

A: This election will pass and you have friends and family that have a different opinion. That is all. So love them as they are. That is the gift of where you live you have the ability to have your own opinion. Remember the love. Is the person more important than this election to you?