I finished reading The Catcher and the Rye last night, again. I loved it. That's my life. Sort of.

What does it mean when you identify so strongly with a character that ends up in a mental institution?

Nothing, I'm sure it's fine.

This morning as I was getting into my car, a retired couple that lives upstairs were walking by and they stopped to ask me if I drink.

I said, "barely and rarely."

The husband said that they have a real problem with it. He said if I ever want to drink to come up to their house.

I found that depressing as it was 9 AM.

One time I came out to the parking lot and found him waiting for someone to walk by to ask them to take him to Longs the drug store down the street because he was too drunk from the night before to drive. I ended up taking him and the only thing he bought was Vodka. It was morning then too.

I got to the beach and it wasn't even that crowded for a Saturday. The water was so calm and glassy and no one was out snorkeling.

I grabbed my snorkel gear and I went out there for quite a while waiting for something to film before I came upon a honu (sea turtle) eating algae off of a rocky point.

I probably got 10+ minutes filing it.

I was wedged in a pretty precarious spot that made me keep checking behind me and around me to make sure I didn't brush up against any coral. I don't know how I made it in there so long but after being so calm, a wave finally came and washed over my head and sucked me back some so it was time to go.

It was an epic outing.

After snorkeling, I went to a psychic fair that I just learned about last night (island time).

My back has been aching (as always) and they usually have someone doing chair massages at these things. I dreamed about getting a massage all night since my spine feels like what I can only describe as splintered.

I got there an hour after the event was to have started but the chair massage person had only just got there and was setting up, so I had intuitive reading while I was waiting.

It was really good! The reading was only 20 minutes long. It had a lot to do with Grandma, who recently passed away.

The first card was Sixth Chakra/Metatron. 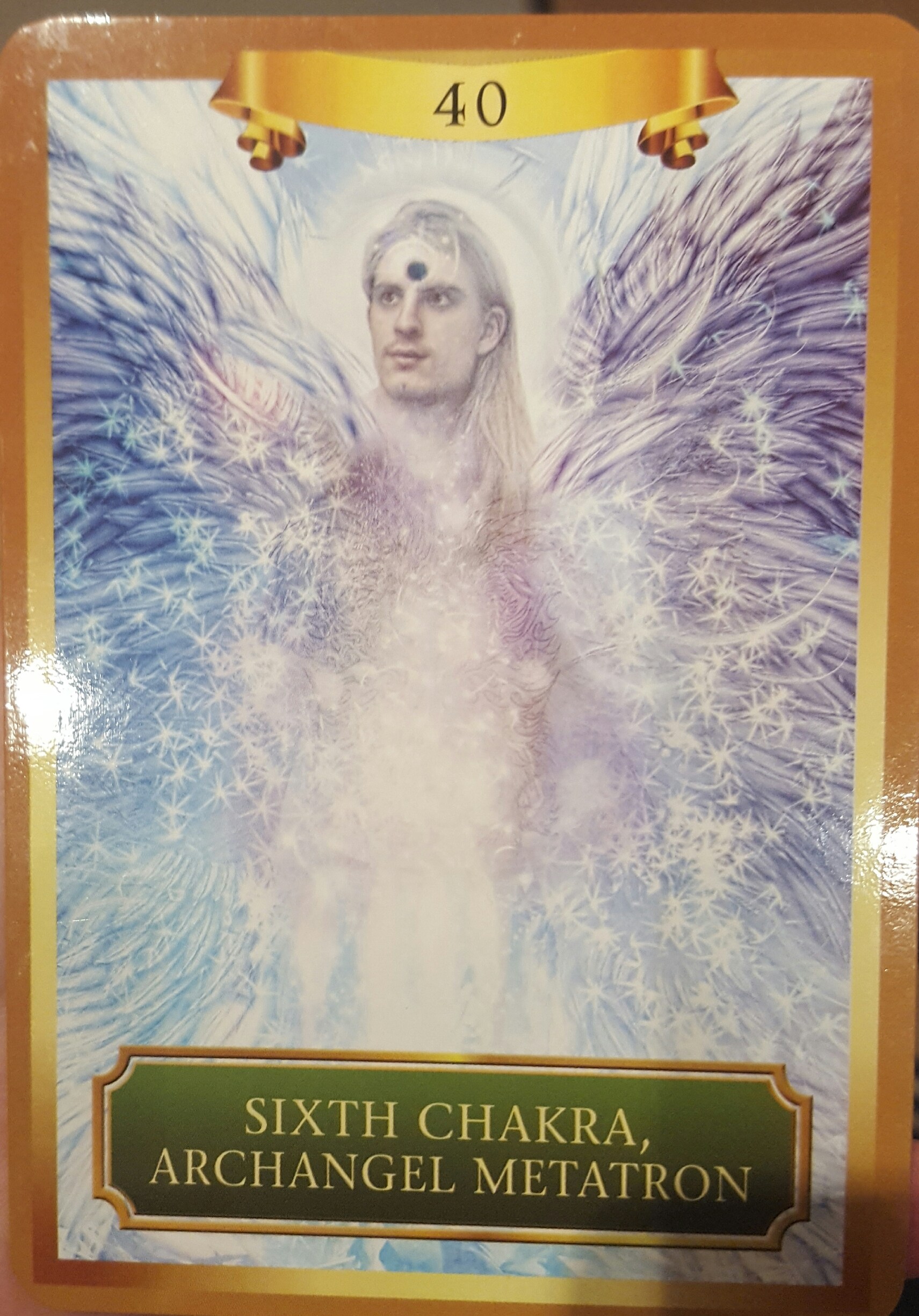 The Sixth Chakra represents your Third Eye, or your sixth sense.

She said this card has to do with being intuitive and having a knowing sensation in your body when you're making a right decision.

Yeah, clairsentience. Got it.

Metatron, is known as the "Scribe of God," which is significant for me as a writer and a student of the esoteric. I can use all the help I can get.

The second card was a Woman Holding a Coin. 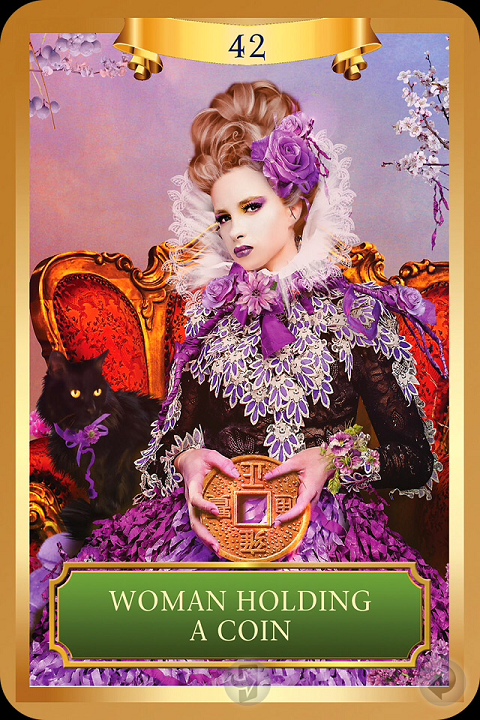 She asked me if I was close with my aunt. (I am.) She said I don't know if she's going to give you something like a ring or money. (She is currently going through all of my grandma's things.)

Then she asked about the other females in my aunts lineage. I mentioned my grandma and that she just died 4 months ago.

She said that my grandma is passing the torch to me and to call her in every morning because she wants to be involved in my life and wants to help me with whatever.

She said that my grandma very much wants to connect with me but that she has to be invited in. I have to turn on the motor so to speak and she will propel me.

I need to say, yes. Yes, to accepting the torch. Yes, to receiving help. She really kept reiterating that I need to say yes.

She was saying so much about my grandma that I started to get all tingly and my heart was getting all warm and spreading throughout my chest. I know she was there. I've experienced this sensation before during a psychic reading when a dear friend came through. This is my clairsentient feeling when connecting with spirit.

I told her how my grandma and I used to really bump heads. She said that my grandma was sorry for any negative memories and that everything she did, she did to make me stronger. (Well, mission accomplished.)

She said I need to let go of how I think something should look like or how it should come about because it's keeping me stuck. Instead, I need to focus on the outcome. (Law of Attraction 101). I needed the reminder.

For example, instead of torturing myself with trying to write a book and get it published so I can feel accomplished, I just need to focus on feeling accomplished and let the universe provide the best way for me to obtain that feeling.

She said she sees a triangle formation. I was at one point by myself leading and that I have a bunch of observers that are interested in following me and that eventually I will have three people who will be like my pillars.

The third card was Storm Warning. 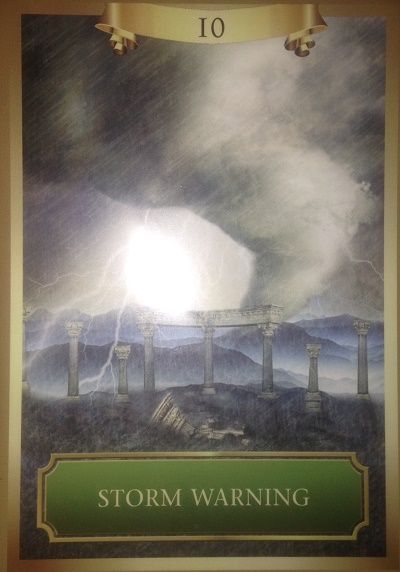 She said she saw a desk with lots of papers, books, and collectibles on it. Haha. Accurate.

She said to just know that I can weather the storms because I have before and that storms provide a clearing and clarity.

She talked about a guardian angel who she sees behind me and kind of wrapping around me from behind. She's got my back and also acts as a propeller.

She said she sees me in the water with like a rock in front of me and that my guardian angel was there. The lady couldn't quite get what that image was supposed to represent.

I told her that she was literally describing where I just was before I came here - wedged in a precarious spot in the water shooting a turtle eating off of a big rock in front of me.

I didn't have to keep looking behind me and all around because my angel had my back.

She told me to look carefully at those photos because something might show up. (I didn't really see anything notable. The rock kind of looked like a face. The turtle is on the left and looks like there is something above it.)

She also mentioned calling on the Archangel Uriel, specifically.

That was all the info that came through that I remember.

When I got in my car, Taylor Swift's song Love Story came on and I was singing it at the top of my lungs thinking nothing of it. I was just pulling out of the parking lot when I got to the lyric "baby just say yes" and I burst into tears.