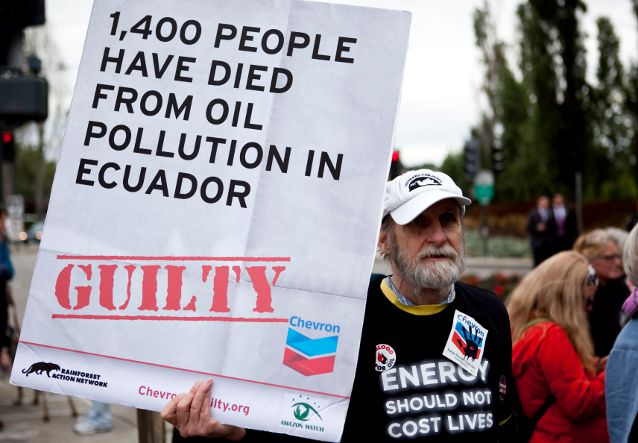 In 2013, Amazonian Indigenous people in Ecuador, won an $18 billion settlement against Chevron. Chevron, operating as Texaco at the time, made a conscious decision to deliberately dump billions of gallons of oil and cancer causing toxic waste into the environment to save themselves the costs of disposing of it properly.

There were Indigenous people living in the area and many people died as a result of the toxic waste. Their native culture has been decimated. The environmental harm is still out there in the Amazon rainforest more than 20 years later because Chevron hasn't cleaned it up and they haven't paid a penny of their court ordered judgment that was upheld by two Supreme Courts.

Instead of fixing their mess and paying the people they've harmed, Chevron is using it's obscene wealth to go after Steven Donziger, one of the Human Rights lawyers that brought this class action suit against them.

Chevron went to war against Steven by hiring 60 law firms with 2,000 lawyers in order to destroy his career and life as a warning to anyone else who would consider coming after Chevron. Just two of those Chevron lawyers from the firm Gibson, Dunn, & Crutcher charge $13,000 an hour. It's not like Chevron doesn't have the money to pay the judgment against them. They just don't want any of their money going towards accountability for wrong doing.

Chevron has so much power that they prosecuting Steven themselves. This is our country's first corporate prosecution. This has never happened in our country. And the tactics Chevron is using and getting away with should make us all stop and say what the fuck?! NO! Not on our watch.

Chevron claims that the judgement Steven won against them is the result of fraud. Chevron claims that Steven was engaged in a conspiracy to extort money from Chevron just by filing the class action lawsuit in the first place. Chevron concocted a story that everything Steven and his colleagues did was criminal because there was really no pollution, so they are saying Steven engaged in what they are calling a "Sham Litigation."

Chevron claims that all the money Steven and his colleagues used for the litigation of the class action suit is money laundering and wire fraud on the theory that the whole case against them is a fraud.

They created this theory of extortion based on witness testimony from a former judge in Ecuador, a judge that Chevron paid $2 million to lie and provide false testimony to say that he was in a meeting where Steven tried to bribe the judge - when the judge was actually bribed by Chevron!! This is the typical corporate play book. It's false testimony. But they paid the guy enough and relocated him and his family to the U.S. so that he was willing to say it.

Chevron sued Steven civilly under a provision of the Racketeering Influenced and Corrupt Organizations (RICO) Act. When I hear RICO I think of it as the law that goes after mobsters. I'm a law school graduate and didn't even know, or forgot, that there was a civil provision of RICO! I looked it up and these cases are prone to get dismissed very early on.

Chevron sued Steven for $60 billion, the largest personal liability claim in U.S. history. They later dropped their demands for financial damages because it would have necessitated a jury trial. Hmmm...

Instead, Judge Lewis A. Kaplan, a former corporate lawyer for tobacco companies, became Steven's judge and jury in the RICO case. Judge Kaplan ruled that the original class action was fraudulent based on the testimony of the guy who was paid to lie. That guy has even admitted that he repeatedly lied in U.S. federal court. Judge Kaplan didn't even consider all of the environmental evidence of pollution - which was the whole basis of the class action!

Judge Kaplan banned Steven and his clients from trying to enforce the judgment against Chevron in the U.S. He ordered Steven to pay millions in attorneys fees to Chevron. Since Steven couldn't pay it Judge Kaplan ordered Steven to turn over his phone and computer to be searched to see if he was hiding money. Steven refused because those devices contained decades of client communications and could make them targets of Chevron. He asserted attorney-client privilege. Judge Kaplan slapped Steven with a contempt of court charge for not complying with his order to give up his devices.

Once he was charged with contempt in this civil case, Judge Kaplan was obligated by law to take the charges to the U.S. Attorney's Office for the Southern District of New York. Only the government can bring criminal charges against a person. SDNY declined to prosecute the case. They said they didn't have the resources (to deal with Chevron).

There have only been a handful of times when the judge charges criminal contempt of court and for some reason there is a conflict and the local prosecutor cannot prosecute the case so the judge can appoint a disinterested lawyer to prosecute the case to represent the public that doesn't have a financial interest in the outcome. That prosecutor is supposed to be supervised by the Department of Justice.

Chevron convinced Judge Kaplan to appoint a private law firm to prosecute Steven for contempt of court. Kaplan did not use the usual random case-assignment procedure to select the law firm. Judge Kaplan appointed the law firm Seward & Kissel himself without disclosing that Chevron was a client of theirs.

The lawyer from the firm chosen to prosecute Steven, Laura Preska, is a prominent member of the Federalist Society - an organization that Chevron is a major donor.

Seems like a big fucking conflict of interest. This is basically the court of Chevron and with their unchecked power and influence are punishing Steven. On the first day of his case they put him in an ankle bracelet which he still has on almost 2 years later.

He has been denied his request for a jury trial, has been disbarred and has been on house arrest for almost 2 years and counting for a misdemeanor charge that he hasn't been convicted of!

Laura's law firm Seward & Kessel is being paid $300 an hour to prosecute Steven. They are being paid out of a court fund of taxpayer money. The firm has already billed $464,000. Half a million dollars to prosecute a misdemeanor! A misdemeanor that no one ever goes to jail for! When all Steven did to deserve this is help indigenous people who were poisoned by Chevron!