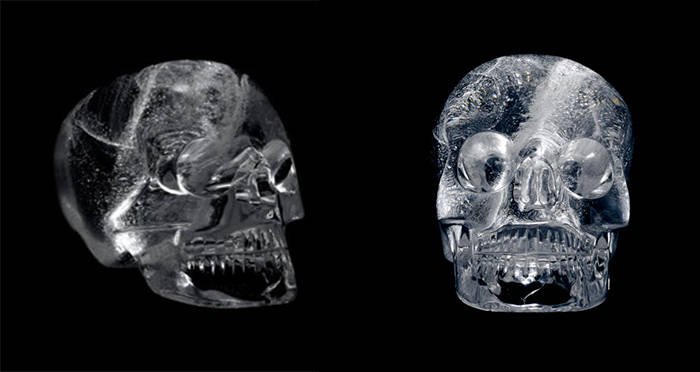 Info transcribed through an interview with Emanuelle MacIntosh.

The video keeps getting taken down. Here is a partial transcript:

There are 13 crystal skulls. Each are individually designed and have a unique signature.

13 is a transformational number.

What are the crystal skulls used for?

Individually, the crystal skulls raise the vibration of anyone who knows how to wield their power. To wield their power you have to apply the correct intention. The person connecting with the skull will have a direct communication with Source.

When all 13 crystal skulls are reunited they create a very powerful surge of energy that allows physical creation to take place - instant physical manifestation.

It gives you the power to neutralize old realities. You create a new dimensional reality. You can eliminate what you don't like about the world and society.

The crystal skulls are tools from Source. Though, human beings created the crystal skulls. At the beginning of civilization, people had a real close connection to Source.

Individuals made contracts before they were born to come here to Earth and aid the planet in some way. Earth is a much lower frequency so you don't have full access to your high frequency memories. After they're born they have to remember. They would get dreams, premonitions, visions where to get the crystals.

13 human beings came together and got help from Source itself in order to create these. The crystal skulls are made out of quartz. Crystals have specific vibrations - a unique identity and energy pattern.

The people of Atlantis always knew how to use crystals for healing and creation. All the skulls were made out of one big chunk of crystal found somewhere in Atlantis.

This civilization used sound therapy - vibrational energy. Everything that is, is always vibrating. Even objects that appear to be standing still.

They have the ability with their mind and with tools to change the vibrational quality of matter.  They would change the vibration so the object would become less solid by changing the frequency of the item and then very delicately they would be manipulating the molecular structure by using other crystals.

Most of matter is empty space.

Why a skull shape?

In their civilization, a skull was considered a link between the afterlife and the physical life. For them it was reflection of connecting both worlds together. Physical and nonphysical.

They were modeled after a female skull. Females had the most influence.

They would do this during certain solar system events.

That's why you see so many similarities between certain spread out civilizations. Egypt to the Incas for example. They all worshiped the sun around the same time because of these beings.

What happened when these beings died?

They were passed on from generation to generation.

Overtime, through many changes, the information would start to die with the people.

Now people are awakening and being drawn to them. They know there is Source there that can help us.

More on the crystal skulls from these excerpts of Dolores Cannon's book The Search for Hidden Secret Knowledge:

Dolores (D): Is this the source of where some of the skulls come from?

D: We're curious about the skulls and how they were made. Were they made on these other planets?

C: They were made on this planet by ancient civilizations. And the knowledge of "all that is" is contained within the skulls.

D: The skulls were made by ancient civilizations?

C: Yes. And the knowledge that they knew, and that was channeled through them from the power of our Source, the Source of all. That is within the crystals.

D: Then they were not taught how to do this, or shown how to do it by someone else?

D: There have been many arguments and discussions about how they were created. Some people say it was with tools, but it would have taken an incredible amount of time and energy to do it that way.

C: It is very significant that you use the word "energy" because Source is energy. And the energy that was connected through the ancient ones, their connection with Source was so powerful and so directly connected, that with the the combination of the two and the stone, we have a trinity. So when we have three together, anything is possible. Everything is living. Everything is alive. And with the ancient one holding the stone, which is a living being, and connected directly to Source, anything is possible in the shape of the skull. Form came into being, came into physicality, simply by the energy.

D: Why were these objects made in the shapes of skulls? What is the significance?

C: In the human body the head or the skull houses the brain, or - to put it in modern terms - the computer. The biological computer. It was a place to house the mental, the intellect, the knowledge. And a crystalline structure is very powerful in holding knowledge. So the significance of it being in the shape of a skull is that a human can associate skull with knowledge, with the mental, with the most important thing.

D: So they would each contain different types of information?

C: Exactly. And the purpose for which they were carved was different. And it is up to those who come in contact with it to discover their meaning.