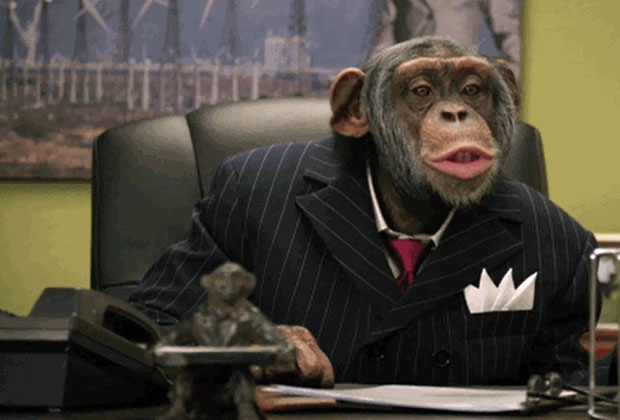 A few weeks after quitting the Crypt Keeper's office in Part One, I started applying for jobs again and I got an interview for an office job.

I walked in the door and what do I see but none other than a cockroach in the process of dying right next to the chair they had me wait in.

It was so symbolic of how I felt being dressed up in a monkey suit on the verge of losing my freedom again.

Whereas, the Crypt Keeper found my legal background intriguing, these guys saw it more as a threat. I didn't get the job. Thank God!

My next interview was at a resort.

Something about putting on my monkey suit for an interview always makes me feel sick. It's so fake. It's sickening to have to pretend to be something that you aren't for something you don't even want to do in the first place. Then to walk in and find a bunch of other applicants dressed in even fancier monkey suits was utterly depressing.

I got marched down to meet with the All Mighty Cubicle Queen. We sit in her little box and all she wants to know is why I left the Chiropractor's office?

Because my boss was the Crypt Keeper and treated me like shit. Err, I mean, uh, I left because it was a negative work environment.

Yeah, the more politically correct answer didn't go over well. I could see it on her face. That was the beginning and the end of the interview and we both knew it.

She tried to be professional and ask a few more questions, but her irritation of me wasting her time was palpable. She was ready for the next monkey in line.

I left there feeling humiliated and am pretty sure she shredded my application.

I love how some douche bag in a cubicle is like the fucking Gatekeeper to my life.

YOU SHALL NOT PASS!

I applied for another position at a hotel that I felt was literally meant just for me. Unfortunately, my interview was rather alarming.

The guy interviewing me seemed to be dead inside. You know that empty look behind the eyes? This person had no facial expressions, no light behind the eyes, no life force at all. This is what working does to you.

It seemed like this person was trying to warn me when he told me how demanding that place was to work for and like I had no idea what I would be getting myself in to. It's like he was doing me a favor.

I applied for another hotel job. I got a call back for an interview. I put my monkey suit back on and waited for my turn out in a hallway filled with a dozen other monkeys.

I enter the HR office and the Director in charge seemed to be drunk, or hungover, or otherwise intoxicated.

This person couldn't remember what their position was when introducing themselves. I believe her exact words were: Who am I and what do I?

The Director said that I wasn't qualified for the position that I had applied for but they had an opening for a Housekeeping Clerk.

She took me down to the dungeon, er, housekkeeping quarters and had me talk to the lady in charge down there.

Her office was a disaster but she was quite pleasant, sober, and kind. She completely understood that I was trying to start over and needed a chance to figure things out.

She convinced me that this position was a good place to get my foot in the door at this resort and that later on I could move to a different department - maybe to one with windows. It would be nice to remember that I live in paradise.

The Misadventures of an Indigo in the Workplace Part Three