The Misadventures of an Indigo in Paris

I had never been to France before. I registered to study abroad in Nice my first summer of law school. This trip is the only thing that kept me from dropping out of school after my first year.

I decided to stay in Paris for a week before school started. I rented an apartment in the Latin Quarter and arranged for transportation to get me there when I landed.

Unfortunately, during my layover in Newark, my plane was delayed for 6 hours! I could have flown back to Arizona in that amount of time. I was totally miserable and sooo tired. I can't sleep on planes so I had been up for way too long.

Finally, I landed in Paris and my shuttle wasn't there. I called them from a phone at the airport and they said they had waited for me (why didn't they track my flight?!). I had to wait a while for them to send another shuttle but at least it came!

I remember sharing a ride with a couple of guys from New Orleans. They had been through Hurricane Katrina and other passengers were asking them about their experience. It was a very somber trip.

One-by-one each shuttle passenger got dropped off at a normal place in front of their accommodation. However, my apartment was located on a pedestrian only street. So, I got dropped off on a street corner and left to fend for myself.

I found my building and had the access code to enter. It worked! The lady I was renting the apartment from was supposed to meet me there and give me the key. She had my flight information as well, but when I got there she was not there either! WTF?!

I was so tired, frustrated, and panicking - plus I had to go to the bathroom so fucking bad.

I stood inside the little lobby and continued to call and call to no avail when FINALLY, with almost no battery left, the phone started ringing!

I didn't do anything different than the previous 100 times I called. I had just surrendered to the fact that I was in the City of Love for the first time -- alone, stranded, and going to have to take a shit in a garbage can, when the call finally went through! It was a miracle!

The lady answered and told me she had waited for me for an hour and that she had left the key to the apartment in the mailbox! What?! (Why didn't you track my flight?!!!!!)

You mean the key has been right in front of me this whole time! Ahhh! I had the power all along.

Anyway, the saga was not quit over. There were no apartment numbers on any of the doors. I didn't know which one was mine!

There was no elevator, so I hauled my suitcase up to each door, knocked on it, and then stuck my key in the door to see if it would work. I could hear other people on the other side of most the doors but nobody answered.

Finally on the fourth floor, down a dark hallway, there was a door that didn't look like any of the other apartment doors. It was more like a wooden gate and I just knew that had to be the one. It was.

I got in and was shocked by the tiny smelly box I was going to be living in. It wreaked of sewer gas. There was only one spot in the entire apartment where you could stand up straight and I'm only 5'6"! It was a goddamn hobbit house. The door totally made sense now.

I think I stayed in bed for the next day or so. Who knows. I was a mess. I didn't have any brain function for the first 2 days. I had to wonder the streets like a zombie looking for any place that sold toilet paper. This is surely the root of my irrational fear of running out of toilet paper. To this day, I hoard it.

The most energy I could muster was to ride the double decker hop-on hop-off bus but I never hopped-off. I just rode around the city in circles.

As I started to acclimate, I would go out to cafés and sometimes the workers would try to converse with me but they didn't speak English so they would just say American words to me like Coca-Cola and Kobe Bryant. I would just nod. They were trying. Everyone was nice.

Soon, tourists started stopping me and asking for directions! I would have been proud if I actually knew the answers.

One day, this girl stopped to ask me how to get to Sainte-Chapelle. I of course had no idea and had never even heard of it but she inspired me to find out.

Going there might be one of the most memorable moments of the trip. The stained glass chapel took my breath away. It was such an unassuming building who would have known the treasure that was inside.

Not one picture I took captured its magnificence. There are just some things that you have to see in person.

I definitely started off the trip on the wrong foot but it wasn't all bad. I'd still like a redo. Next time, I'm staying at a hotel! 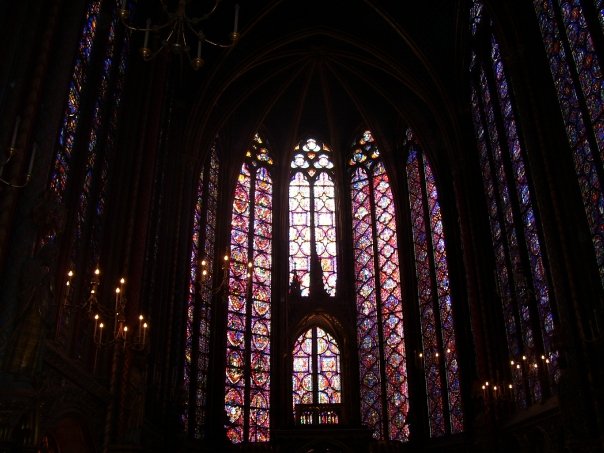